Skip to content
1. What do you mean by object oriented programming.
Ans. Object -oriented programming is a programming concept where we first create an object then we define the characteristics or functions of an object in the form of data known as fields and methods.
examples of OOP programming are java,c++,python,VB.net and ruby.
simula was the first oop language.
2.Difference between Abstraction and Encapsulation :-

The easier way to understand Abstraction and encapsulation is as follows:-
Real World Example:- 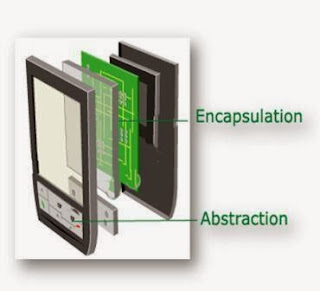 3.What is the difference between JVM, JDK, JRE & OpenJDK?

The Java Virtual machine (JVM) is the virtual machine that run the Java bytecodes. The JVM doesn’t understand Java source code, that’s why you compile your *.java files to obtain *.class files that contain the bytecodes understandable by the JVM. It’s also the entity that allows Java to be a “portable language” (write once, run anywhere). Indeed there are specific implementations of the JVM for different systems (Windows, Linux, MacOS, see the wikipedia list..), the aim is that with the same bytecodes they all give the same results.

Ans. A byte code is an encrypted binary representation of java program when it is compiled.

This two stage process makes java platform independent as java files are not directly converted to executable files instead they are converted to byte code file which can be used on any platform.
For more features refer following link:
http://java.meritcampus.com/t/76/Java—other-features?tc=mm92

The java command-line argument is an argument i.e. passed at the time of running the java program.
The arguments passed from the console can be received in the java program and it can be used as an input.
So, it provides a convenient way to check the behavior of the program for the different values. You can pass N (1,2,3 and so on) numbers of arguments from the command prompt.

Example of command-line argument that prints all the values